When I first met my husband, the guy I didn’t  know would end up being my husband, I knew he was the “one.” He had practically every quality I would have wanted in a mate at that time. He was a gentleman, handsome, kind, smart, generous, and worldly. He knew things I didn’t and we had many interests in common. Years later I would realize that we were actually rather different in a lot of ways, but in the beginning it appeared we could have been twins, fraternal of course.

After six weeks of dating, Chuck told me I was the “one” and he was in love. I was rather stunned, it seemed so fast, but we decided to take our time and see. Back then in the late 80’s we had time… it was on our side. I welcomed and cherished his love and I loved him back, with all my heart. But there was a part of me that was a little frightened. I knew the possibility of where this could lead and the thought of being with him forever, was scary. I also wondered all sorts of things like: what would happen if it didn’t work out, what if we fell out of love, what if we couldn’t get along after a while- what if this, what if that. As time went on, we decided that we were going to get married. By then,I was sure it was right and I was willing to take the risk and marry my beloved.

Love always involves risk. The most well-intentioned, compatible couples, never really know what the future will bring to a relationship. You can never know how time and unforeseen circumstances will impact your union. Because of this uncertainty, many people are afraid to take that risk. Past relationships, personal family histories can impact how one feels about coupling, so some remain solo, not willing to take that step and risk love. Individuals get used to their lives being neat and tidy and after years of being alone, they become unwilling to complicate their lives with the messiness and complexities of loving another, and that’s okay for them.

One of the greatest dilemmas that one faces after a spouse dies is whether one should take the risk to love again. Early on, in my bereavement group, we discussed the possibility of finding love again. For me, during that period, my grief was so raw that that idea was far from anything I could ever imagine doing ever again. Some of the people in the group felt they’d had their “one.” Still, to others, whose grief was still fresh, that thought seemed kind of creepy. We also discussed the fact that if we were to consider falling in love again, there was always the possibility of losing another spouse or partner. We had all been through so much watching our spouses deteriorate as they battled various forms of cancer, so we were not so sure if we were willing to take another risk of losing a loved one again. For myself, personally, I felt that I could not survive another death of a spouse. The pain from losing Chuck was so intense, that I dismissed the possibility of love in my future, at least at that point in time.

Recently, I received a lovely  note, in response to a note I had written, from someone I hadn’t heard from in a while. I had written her to thank her for a book she had given me at Chuck’s funeral, which was the only book that really addressed what I would soon be experiencing. The woman had given it to me because it was a book she had used when she was grieving the loss of her second husband. In this note she went on to explain that after a few years  she met a wonderful guy, married again, but after nearly 8 years she would have to return to that book for comfort again as she buried her third spouse, who succumbed to the same illness that her second husband  had. She questioned why God would have had her repeat that experience. I know that my friend was really afraid to risk loving again, but in time she met a new gentleman and they are now happily partnered. She had decided, after a time, to take another leap of faith.

With love comes many risks. We never really know how things will turn out, but we have the highest hopes for the best.People rarely go into a marriage thinking that their partner will leave them, that love will turn sour, that their spouse will get ill or die. We are hopeful that  our unions will be fruitful, full of love and last forever. The fact that one day it will end never enters our minds as we begin a new journey with a husband or wife.

We cannot live our life playing it safe. Living has to do with jumping in there, taking a leap of faith, putting aside our fears and taking a risk. When you do, life has texture, and color, and meaning and is full of surprises and wonder. When we play it safe our hearts may never get broken, but we will never know the wonderfulness of connecting with someone intimately, loving them and opening our hearts,and allowing someone else to care for it. That’s when one must have trust, have faith and be willing to be brave.

The folks in my bereavement group have become an extended family. Since that time in 2009, many of us have made big changes in our lives. A few have decided to take a risk and are happily ensconced in relationships with someone new. It is what our deceased spouses would want for us, to carry on, to be unafraid and to risk love again. Just like my friend, who risked love a second time, and a third, and a fourth which added to the beautiful mystery of what we call life, her life. After all, she took a risk when she married my husband, he was her first, and I took a risk when I married him too, as I was his third wife. For me it was a risk well taken as I opened my heart up and entrusted him with it.

Now, after all that I’ve been through, having lost Chuck, I would do it all over again. It was an experience that has enriched my life, increased the depth of the scope of my vision as to what life has to hold, and it has allowed me to know that it is “better to have loved than never to have loved at all.” A big risk, as I forge my new beginning but,in the scheme of things, well worth it. 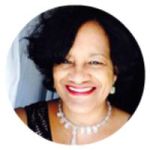 Yvonne Broady was raised in Brooklyn, New York. She received a BA in Art Education from C.C.N.Y and an MA in Art Education from Teachers College, Columbia University. After graduation she taught elementary school, was an arts liaison, produced and directed children’s musicals and simultaneously designed jewelry that was sold in various boutiques and department stores across the Northeast. Yvonne also wrote freelance reviews for local papers on fashion, style and New York City restaurants. Her love of people and style led her to produce several cable TV shows.New York Highlights, which aired from 1984 to 1991 was a talk show covering a variety of topics including financial management, male-female relationships, mother daughter relationships, entrepreneurs, spirituality and other themes from a mostly African-American perspective. The second show was The Way We Live. On this show she explored the interior design and lifestyles of people in and around the Tri State Metropolitan area.